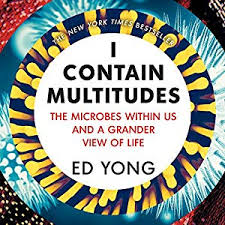 This book lights a rare sort of fire. Prepare for ideas that catch and flame and race.  You will focus and refocus on the surprises that Ed Yong keeps bringing on page after page of “I contain multitudes.” He’s playing with your sense of scale and identity.

You’ve heard of the microbiome, the one in your gut is most often discussed in the grocery aisles where well-meaning people claim to be buying special yogurt to help their digestion.  The human gut microbiome is millions of microscopic creatures that live in a symbiosis with us – their hosts – and digest our food and communicate with our brain. But Yong is taking you on a bigger journey, a better setting of context, a longer long view.

“All the visible organisms that we’re familiar with, everything that springs to mind when we think of “nature,” are latecomers to life’s story. They are part of the coda. For most of the tale, microbes were the only living things on Earth.” [pg.7]

Gently, and with exquisite detail, Yong shows readers the characters and colonies and “social” lives of microbes inside a pangolin, a squid, a cicada, a rat and a mosquito. Knowing that his readers may hang by their fingernails, he offers metaphor and analogy to give us hand holds  on a journey more like Alice’s in Wonderland than a simple march from step to step.

“Think of it this way: an animal’s genes are like set designers in a theater – they create the stage upon which specific microbes can perform. Our environment – friends and footsteps, dirt and diet – then affects the actors that take the stage. And random chance lords over the whole production, which is why even genetically identical mice that live in the same lab end up with slightly different microbiomes.”

Yong wisely takes time, in the chapter “The Long Waltz” to take us inside the very identity and labeling arguments between scientists. How do we frame and label new understanding.  Should we say “symbiosis” or should we accept new frames like “holobiont?” New ways of seeing require new words.  This book makes you question the very definition of “me” or “mine.” Are you driving or being driven?

One key power that microbes have is exchanging genes with one another, an ability known as horizontal gene transfer.  In Yong’s imagination, we see it as a giant boozy party scene.

“They can exchange DNA as easily as we might exchange phone numbers, money or ideas. Sometimes, they sidle up to one another, create a physical link, and shuttle bits of DNA across: their equivalent of sex. They can also scrounge up discarded bits of DNA in their environment, left by their dead and decaying neighbors.” [pg 191]

Our journey includes some potential fixes that researchers propose. One leverages a bacterium to vanquish mosquito-borne diseases. Another engineers a microbe that could peer into our bodies and repair problems.  Yong wisely includes many caveats with those rosy future pictures. But mostly he leaves us gaping, awestruck, at a new way of seeing ourselves in a new mirror.